Back to Insights
Research report

How to Store Value in a Broken System

The World Has Gone Mad and the System Is Broken

In Ray Dalio’s most recent article: “The World Has Gone Mad and the System Is Broken" he avoids a Doom and Gloom outlook and focuses on the hard facts and economic impacts of global monetary policy since the 2008 Global Financial Crisis.

SwissOne Capital highlights the critical facts and points raised in Dalio’s succinct summary and show how Crypto Assets can play a role in providing solutions to the challenges that face the global economy. Furthermore, the importance of store of value in an environment where global reserve currencies are being printed for free are discussed.

“Money is free … More specifically investors lending to those who are creditworthy will accept very low or negative interest rates and won’t require having their principal paid back for the foreseeable future.”

“[Private banks & Investors are having] enormous amounts of money pushed on them by central banks that are buying financial assets in their futile attempts to push economic activity and inflation up.”

Perhaps the statement “Money is free” is extreme. However, Dalio highlights how easy it is to raise debt and that borrowers are in fact incentivised to be indebted.

As a result, governments are creating an underpin to asset prices by printing money in a vein attempt to stimulate economies. On a positive note, these actions provide certainty and confidence to investors in future asset prices. Unfortunately, the money is not making it into the parts of the economy that will boost activity, productivity and inflation because investors are incentivised to invest and not spend.

“As a result of this dynamic, the prices of financial assets have gone way up and the future expected returns have gone way down while economic growth and inflation remain sluggish.”

Due to this “sluggish” growth, bond investors are even willing to take on negative interest rates to secure a certain downside to an investment (and get paid / incentivised to do so). This only adds to the ever-growing stockpile of reserve cash.

Expected returns are at all-time historical lows while risks to global growth are reaching extreme levels. Due to the oversupply of cheap and “free” money, investors in equity-like investments are willing to take on far greater risks. The resulting force of all this money being pushed onto entrepreneurs, is one of greater risks being taken on with larger sums of money.

This sort of behaviour throws any sort of sound finance out the window.

Deficits Are Funded by More Deficits

“…large government deficits exist and will almost certainly increase substantially, which will require huge amounts of more debt to be sold by governments”

“Where will the money come from to buy these bonds and fund these deficits? It will almost certainly come from central banks, which will buy the debt that is produced with freshly printed money.”

Dalio’s second paragraph goes on to articulate the unprecedented facts and challenges facing pension and healthcare’s inability to meet obligations in reserve currency countries. He concludes:

“Since there isn’t enough money to fund these pension and healthcare obligations, there will likely be an ugly battle to determine how much of the gap will be bridged by 1) cutting benefits, 2) raising taxes, and 3) printing money...”

Gabor Gurbacs, an entrepreneur, financial academic and quantitative strategist, tweeted his displeasure of the current pension situation in his country on the 2nd December 2019:

How is this not THEFT?"

Cut Down Trees and Apply the Ink

“While none of these three paths are good, printing money is the easiest path because it is the most hidden way of creating a wealth transfer and it tends to make asset prices rise.”

“…The big risk of this path is that it threatens the viability of the three major world reserve currencies as viable storeholds of wealth.”

The world is in a debt trap. The cost of servicing government debt (i.e. the interest) is now the 3rd or 4th biggest expense on just about every country’s income statement and growing annually. The supply of Global reserve currency and debt must continue to grow in order for the “broken system” to avoid social unrest. A necessary “evil” so to speak. 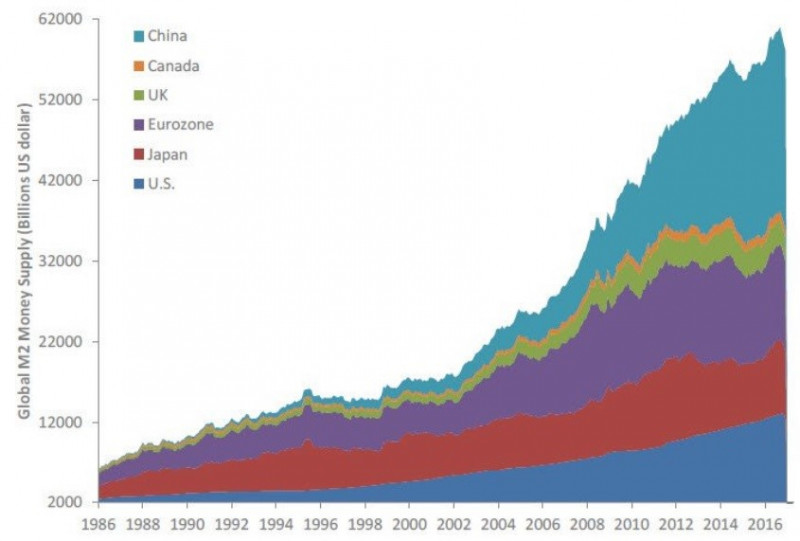 In this seemingly absurd situation, it becomes increasingly difficult for the global population to rely on reserve currency as a store of value.

What is a Store of Value?

Wikipedia describes a store of value as being anything that retains purchasing power into the future. The point of any store of value is one of risk management due to the existence of a stable demand for the underlying asset. Reserve currency is one of the best stores of value because of its liquidity in that it can be easily exchanged for goods and services.

But, when reserve currency is being printed in unlimited supply, questions around its ability to store value must arise.

The major and historical alternative stores of value include:

Commodities, Property, Artworks among others

However, these items are (1) not easily exchangeable for goods and services, and (2) asset prices are currently overvalued and hold greater risks relative to the past by virtue of the oversupply of money.

Until recently, there have not been any direct alternatives to global reserve currencies that provide the same ease of exchangeability or liquidity, hence the ability afforded to governments to print reserve currency without any impact on the store of value feature.

Certain digital currencies (with a fixed supply) now offer an alternative form of money to global reserve currencies with superior store-of-value fundamentals. As the global money supply grows along with the acceptance of digital currencies (due to the ease of transferability in an ever-growing digital economy), demand for such currencies has been on the rise.

The Supply/Demand dynamics of certain digital currencies, therefore, provides an underpin to the crypto / digital currency prices and a strong form of storing value. The dynamics of what is quickly becoming the global digital reserve currency, Bitcoin, are hard to ignore with these dynamics at play.

“This set of circumstances is unsustainable and certainly can no longer be pushed as it has been pushed since 2008. That is why I believe that the world is approaching a big paradigm shift.”

SwissOne Capital believes this paradigm shift will feature the Blockchain, Bitcoin and other Crypto Currencies as well as the various decentralised features that plug the holes inherent in what Dalio describes as a currently “broken global financial system”.

As an alternative to the broken system backing global reserve currencies, Crypto Assets, are quickly becoming regarded as a new asset class alongside cash, equity, property and bonds, providing the world with a new medium of storing value.

These fundamentals make it harder and harder for wealth and asset managers to claim ignorance to these alternative stores of value.

From portfolio management perspective, the benefits that just a small allocation to this asset class in a portfolio can add significant alpha. The mass adoption dynamic create the exponential growth potential for investors’ portfolio.

Therefore, the decision-making process should be simple for asset allocators:

1) How much asset allocation to crypto assets? We have found even a 2% allocation can have significant alpha impacts on a model portfolio.

2) Diversification: Given the immature nature of the crypto asset market, it remains risky to have too many eggs in one basket.

If Ray Dalio’s facts are straight, Cryptos should not be ignored by investors.